Blurb
Kozart
Savage is the world’s biggest rock star.
At
twenty-five, he’s got it all.
Money.
Fame. And the adoration of fans everywhere.
He thought
that was enough to make him forget his past.
Enough to
transform his distrusting heart.
Turns out
that’s not how it works…
Then he
meets a bridesmaid hiding out in a hotel bar.
Probably
the only girl on the planet who doesn’t know who he is.
But she
seems to be the one girl who can give him something no one else can.
Aubrey
Prescott just discovered her boyfriend cheating—at her sister’s wedding.
Trying to
escape humiliation, she seeks refuge in a hotel bar.
While
trying to figure out how to pick up the pieces of what was supposed to be an
amazing senior year in college, a handsome stranger interrupts her
wallowing.
A stranger
who quickly makes her forget why she’s there.
One who,
after an unforgettable night, disappears without a second glance.
But walking
away doesn’t always mean letting someone go.
ADD TO GOODREADS
ENTER THE RELEASE GIVEAWAY

Kozart Savage is a bona fide rock star. Looking from the outside, he has everything. Unfortunately all the fame and fortune that comes is not enough to fill the gaps in his soul. Until he finds the only woman in the world who doesn’t know him but makes his complete.

After finding her boyfriend infraganti, at her sister’s wedding, with one of the bride’s maids, Aubrey Prescot fled to the hotel’s bar to drown her sorrows, until a gorgeous stranger crashes her pity party of one. He not only makes her laugh and feel beautiful, he helps her save face at the wedding, and spends a wonderful night with her. He left without a goodbye, until a text message from an unknown caller appears on Aubrey’s cellphone.

J. Nathan knows how to weave a hooking yarn and her story of a rock star falling for the kind and caring Aubrey is executed flawlessly.

I loved this story so, so hard! I loved its rhythm and flow, and the way Kozart didn’t want to reveal his identity to Aubrey because he felt comfortable with the girl who saw the real man.

Kozart and Aubrey together were wonderful, their banter in person or texts was spot on. I loved how sweet and thoughtful Kozart was with her. I admired Aubrey’s strength and found her sarcasm charming.

I read this story in one sitting loving every minute of it. I also enjoyed reading about Aubrey’s friends and family. I given the chance, I can’t diced if I’d want to read about her friends first or about Kozart’s bandmates.

Kozart is a standalone rocker romance by J. Nathan. It is a perfect rocker romance told from the both point of view, and has a delicious happy ending. No cliffhanger. 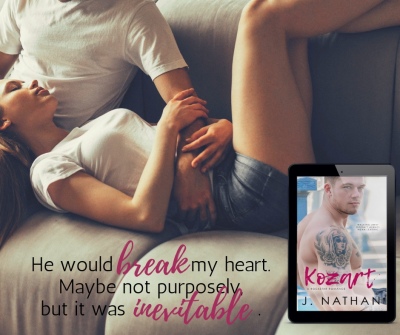 Excerpt
I gave myself one last look and grabbed the handle on the door. I stepped
out, gasping as someone grabbed my arm and pulled me out the nearby exit
door.
My heart raced as I pulled free, spinning around in the dark alley we’d
ended up in.
Kozart stood in front of me, a ball cap pulled down low on his head and a
smirk on his face.
My eyes widened. “What are you doing here?”
He dug his hands into the pockets of his torn jeans. “I was in the
neighborhood.”
I glanced around the windowless alley with its giant dumpsters and foul
odor.
“I was in town,” he clarified. “I just wanted to grab a drink and low and
behold, here you are.”
“Said every good stalker.”
He threw his head back and laughed. The sound was just as sexy as it was
over the phone, if not more as it echoed in the alley.
“And I’m sure I don’t need to mention the
dragging-me-out-of-the-bar-into-a-dark-alley thing,” I added.
He chuckled, his eyes lowering to the pavement.

J. Nathan
is the author of new adult and sports romances with cocky heroes and sassy
heroines. When she’s not writing, she’s a total romance junkie! Add an alpha
male who’s unlikable in the beginning…even better. She loves guys in backward
hats, country music, the summertime, and her amazing family and friends.
Author Links
AMAZON

View all posts by dalitzamorales

Looking for a Review? Search here!

Links to Offers and other cool stuff from Amazon

What Dali’s listening to…